Endogenic forces have been a recurring and important topic in Geography for IAS entrance examinations. You will get questions on topics like this in your exam as well as in the interview. Therefore, it is wise to learn the key points of all the topics to be extra ready for any question. In this article, we will cover the crucial aspects of endogenic forces that are significant from the IAS preparatory aspect. Let’s start with what are endogenic and exogenic forces?

When these internal and external changes occur continuously, chemical changes and stress are triggered on the surface of the earth, which eventually leads to the formation of uneven terrains. Lets learn in detail what are the exogenic and endogenic forces?

What are Endogenic Forces?

# Endogenic forces are land building forces that play a crucial role in the formation of the earth’s crust.

# These are also called internal pressure as they form, originate and are located below the surface of the earth.

# Primordial heat, radioactivity, tidal and rotational friction from the earth results in the creation of this energy.

# The main processes involved under this are volcanism, folding, and faulting.

# Slow movements: These are also referred to as Diastrophic forces. It results in changes over some time.

# Sudden motions: As the name suggests, these are the visible motions, and include significant landform changes like earthquakes and volcanic eruptions.

# Epeirogenic motions: this is the process of warping or upliftment of large parts of the earth’s surface.

# Orogenic movements: this is essentially the process of mountain building that involves major folding, and affects the long as well as narrow belts of the surface.

# Earthquakes that occur due to relatively minor local movements.

# The horizontal motions of the crustal plates, or plate tectonics.

# These movements are caused by the horizontal pressure that acts on the surface of the earth from side to side.

# Orogenic movements or horizontal movements are also referred to as mountain building. They can be categorized into two major pressures such as the pressure of tension and pressure of compression.

# Orogenic motions create tension to the strata’s horizontal layer, which further leads to massive structural deformation of the earth’s surface.

# Epeirogenic movements are essentially responsible for the creation of plateaus and continents on earth.

# These powerful movements occur from the centre of the earth.

# Vertical movements can be responsible for both the upliftment as well as the subsidence of the continent.

# They cannot create variation in the horizontal rock strata unlike discussed in the previous type.

What are Exogenic Forces?

Exogenic forces or external forces are forces that draw their power from the earth’s exterior or arise within the earth’s atmosphere.

Exogenic forces cause land to wear down as a result of their action, therefore they are referred to as land wearing forces.

Exogenic processes are processes that occur on the earth’s surface as a result of exogenic pressures.

All exogenic processes are referred to as denudation, which means “to peel away” or “to reveal.”

# Endogenic forces originate from within the surface of the earth.

# Exogenic or external forces are the pressure that occurs on or above the earth’s surface.

# Exogenic forces include the tidal force of the moon, erosion.

# Endogenic forces can result in both slow and/ or sudden motions.

# Endogenic forces produce after-effects that are visible only after it causes sudden damage.

# Exogenic forces create changes visible over a period of thousands or millions of years.

Following are some of the basic terms that one frequently encounters while preparing for the geography exam. Keep these notes handy for your future reference:

In geography, erosion is a term that indicates the action of processing of a surface that removes rock, soil or materials which are dissolved from one location to another location.

What are Lithospheric Plates?

The whole land part of the Earth is broken into various numbers of plates. lithospheric plates refer to the blocks of the landmass.

What are Sand Dunes?

Sand dune refers to a large amount of windblown sand. This can be seen at the part of the beaches which are affected by tides.

Why Do Plates Move?

To answer this question in the simplest form, the Earth’s surface plates’ motion happens due to the immense heat at the planet’s core. Molten rock in the mantle layer moves due to that immense heat.

Also Read: How to Score 300+ In Sociology: The Best Optional for UPSC

How Does an Earthquake Occur?

Most fissures in the Earth’s crust take a long time to shift. However, tectonic pressures can cause the rock on either side of a fault to progressively deform over time. Earthquakes are generally triggered by subterranean rock breaking unexpectedly and moving rapidly along a fault.

The seismic waves that force the earth to tremble are caused by this abrupt release of energy. The plates or blocks of rock begin to move during or after the earthquake, and they keep moving until they become trapped again.

What is Plate Tectonics?

Plate tectonics describes the characteristics and movement of Earth’s surface in the present and past, from the deep ocean trench to the highest peak.

Plate tectonics is a current update on continental drift, which was initially suggested by physicist Alfred Wegener in 1912 and asserted that Earth’s continents “drifted” across the world over time.

Plate tectonics is the notion that Earth’s outer shell is separated into huge slabs of a rock formation called “plates” that glide across the solid inner layer above the core, the mantle.

What is Climate Change?

What are The Factors Affecting Climate Change?

# Volcanic eruptions release gases and dust particles that stay in the atmosphere for prolonged periods of time, producing a partial blockage of the Sun’s rays, which cools the weather and influences weather patterns.

# A little shift in the Earth’s orbit has an effect on the seasonal distribution of sunlight reaching the earth’s surface across the planet. Variations in Earth’s eccentricity, fluctuations in the tilt of the Earth’s axis of rotation, and recession of the Earth’s axis are the three forms of orbital variations. Milankovitch cycles, which have a large influence on climate and are well-known for their relation to glacial and interglacial eras, can result from the combination of these factors.

Why is Climate Change Relevant to India?

India is one of the most susceptible countries to climate change. It boasts one of the world’s greatest concentrations of economic activity, as well as a huge number of poor people who depend on the natural resource core for their survival, with a high reliance on rainfall. By 2020, India’s water, air, soil, and forests are anticipated to be under the most strain anywhere on the planet.

Water resources will become one of the most important ways that climate change will affect people’s lives in India. While water is necessary for life, it is also capable of wreaking havoc in the form of deadly floods and droughts. These shocks will only be exacerbated by a changing environment.

The General Studies paper in the UPSC Prelims and GS Paper 1 in the UPSC CS(Main) examinations both cover geography. Geography provides the significance of human existence, the factors that are favourable to life, and the aspects that are not suitable for human life, according to the UPSC curriculum. As a result, learning these factors will put you in a better position to protect the elements that are essential to life.

The UPSC geography curriculum is broken into several micro themes, which are covered in depth in the syllabus below. You should also stay current on current events in areas such as transportation, catastrophes, and so on.

Make sure to utilise an atlas while you’re studying geography. Determine the location of coasts, states, and other regions by looking at the map image. This is one of the most effective methods for studying geography for UPSC examinations.

Geography is essentially a science, with arts and humanities components tossed in for good measure. As a consequence, you must learn how to approach it in the same manner you would any other science topic, which is to ask why and how concepts operate. There is a different reason for each reaction. You must explore the cause if you genuinely grasp it.

The first few chapters offer a general introduction of the subject. You must understand the fundamentals of geography in order to excel in geography. Investing the time to analyse and comprehend these ideas can aid your understanding of geography while also making the subject more interesting.

You’ll also be free of memory loss’ constraints. Understanding the fundamentals is one of the finest methods to study Geography for UPSC.

Avoid consuming a large number of books. It’s usually a good idea to have a strong understanding of a few good novels. Because the NCERT textbook has already proven to be beneficial to me, any high-level book will suffice for my study. You might wish to study books by Majid Hussain to help you comprehend this topic better.

If there is a significant shift in the terrain or significant development in the world’s geography, you should fully prepare for the issue. You will do well in the UPSC test if you follow these recommendations.

An evaluation of your preparation will also assist you in determining which aspects of your game require improvement.

You can keep up with current events by subscribing to newspapers and publications. Three times a day, thoroughly read the newspaper and a range of articles to stay up to date on all essential information. It would undoubtedly aid your understanding of geography for UPSC Prelims and Mains.

The most stable subject is geography, although the great majority of GS papers may be readily prepared in connection to prelims. In prelims preparation, you study the same NCERTs; all you have to do is recall the facts for prelims and answer some important concept-based topics in 200 words for mains practice.

It’s a good idea to finish all of the covering geography curriculum, notably economic and human Indian geography, with prelims to simplify your Mains preparation following prelims. Separate notes should be kept for current social and geographical concerns affecting India’s politics and economy.

Also Read : 11 IAS Preparation Tips for Beginners: How to Start from Ground Zero? 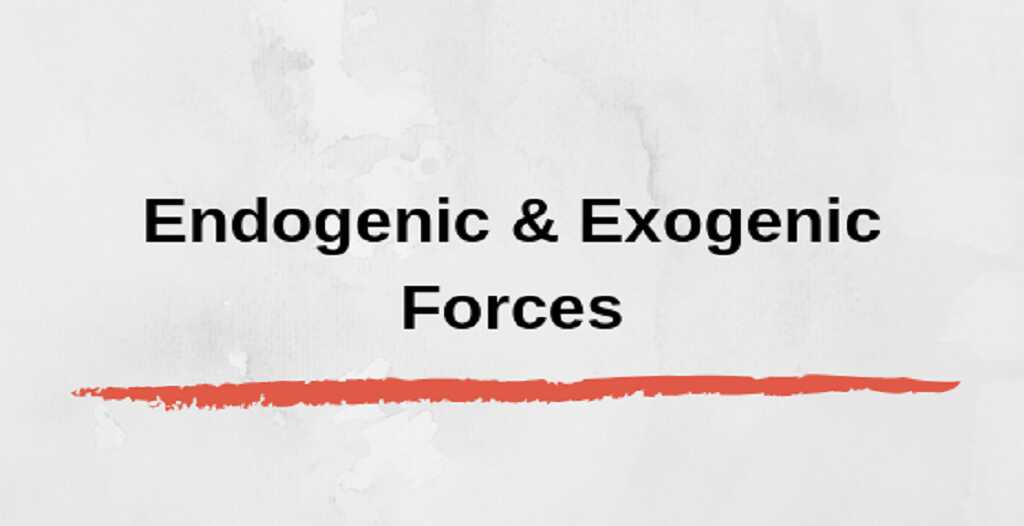 Article Name
What are Endogenic and Exogenic Forces? UPSC Geography Exam Notes for 2021-22
Description
What are endogenic forces? What should you cover about this for your IAS preparations? What are the main things you must know? Read on to get your geography score flying high.
Publisher Name
UPSC Pathshala
Publisher Logo

upsc notes, What are endogenic forces?, What is erosion?
Show Comments

What is the IBPS PO Exam? Is the Bank PO Exam worth Applying For?