Ankita Choudhry, a resident of Meham town in Rohtak district, bagged the all-India rank 14 in the civil services exam, the results of which were declared by the Union Public Service Commission (UPSC).

Choudhry said this was her second attempt in the exam. She said she stayed off social media like Instagram, Facebook, and other online forums for two years to achieve the results.

Let’s read on and get to learn more about IAS Ankita Chaudhary.

In the table below, you will get a glimpse of her basic information

IAS Ankita Chaudhary did her schooling at Indus Public School in Rohtak and then went on to pursue BSc from Hindu College, Delhi University. She pursued MSc from the Indian Institutes of Technology, Delhi. Choudhry’s father, Satyawan, works as an accountant at a sugar mill in Rohtak. Her mother had passed away in a road accident four years ago.

Satyawan said her daughter had been an all-rounder since school days. She used to top in studies and was active in sports and cultural activities. During her school days, she made up her mind about a career in Civil Services; with a clear-cut inclination towards Indian Administrative Services.

IAS Ankita Chaudhary comes from a modest household. She had her early schooling at Meham, Haryana’s Rohtak district. Ankita was a bright student who wanted to continue her education in Delhi after completing her intermediate. Ankita then decided to pursue a postgraduate degree. While finishing her post-graduate studies, Ankita began studying for the UPSC. After finishing her post-graduation, she took the UPSC exam.

Ankita couldn’t pass the UPSC test the first time she tried it. Ankita recognised and corrected her previous errors. She took the UPSC test for the second time with a solid strategy and a lot of passion. Ankita’s approach worked so well this time that she set a new record by attaining All India Rank 14. She credits her achievement to hard effort and a well-thought-out approach.

When she seriously thought about appearing in Civil Services Examination 2017, as per the exam-plan she was to pick only one optional subject and after weighing up things, Ankita decided in favour of Public Administration, a subject that will help her even in her future endeavours. She joined VajiRam & Ravi for General Studies preparation and Synergy IAS for Public Administration.

When you join coaching you form a group and the rest of the information you just have to process yourself. During her first attempt at CSE 2017, Ankita just finished her coaching at VajiRam & Ravi, so there was no time for self-study or for revising the notes. She thinks during her first attempt, her mistake was that she could not go through in-depth topics. As a result, she couldn’t clear the Preliminary Examination.

During the gap after Prelims 2017, she made sure that she revised her notes thoroughly and prepared her own notes, she updated them and revised them multiple times and didn’t refer to multiple sources.

She was choosy about which topic or where she was going to study. So that thing helped her a lot. Her straightforward approach and a clear mindset helped her reach her destination.

Ankita Chaudhary of Rohtak has a powerful success story to tell about her UPSC preparation and path to becoming an IAS officer. The journey of three friends studying UPSC examinations was recently dramatised in the online series Aspirants. This test, often known as the Civil Service exam, is among the most difficult in the country.

As a result, we’re telling you about Ankita, who lost her mother while studying for the UPSC examinations and went on to succeed in the second attempt after failing the first, earning an All India Rank 14 in the process.

IAS Ankita Chaudhary comes from a town in Haryana’s Rohtak district. She attended Rohtak’s Indus Public School. Ankita studied chemistry at the Hindu College in Delhi after finishing her 12th grade. Her decision to sit for the UPSC test was made during her degree, and she began studying after enrolling in post-graduate.

Ankita Chaudhary did not sit for the UPSC Civil Services test till she had completed her post-graduation. She began extensively preparing for the UPSC examinations after obtaining her master’s degree.

While studying for the UPSC examinations, Ankita Chaudhary’s mother died in a car accident. Ankita was surprised and devastated by her mother’s death.

Her Father Became an Inspiration

Ankita Chaudhary’s father backed her up. Ankita’s father, Satyavan, works as an accountant at a sugar factory in Rohtak, and it was his encouragement that pushed her to pursue a career as an IAS officer, then after she studied hard for the UPSC exams.

First Attempt was a Fail

When Ankita Chaudhary took the UPSC test for the very first time in 2017, she ended in failure. Even yet, she did not give up and, after evaluating her flaws, she improved and enhanced her preparation for a second effort.

In 2018, Ankita Chaudhary took the UPSC test for the 2nd time, and this time she received an AIR 14 and was appointed as an IAS officer.

Ankita Chaudhary feels that you should prepare for UPSC throughout your college years or after graduation. You must have a plan in place as soon as you finish college, and you should begin preparing with restricted books.

Make short notes while preparing for quick and simple revision. It is critical, according to Ankita, to practise writing responses for the mains examination.

For CSAT, Ankita stresses the need to attempt as many questions as possible while making educated guesses for the questions that are designed to confuse you. For a beginner, Ankita prescribes regularity and a clear action plan in terms of a daily routine that includes a defined number of study hours. And in the final hours of preparation, Ankita advises you to practice at least 3-4 mock tests, refer to the minimum sources, and above all keep a cool head.

Ankita’s optional subject was Public Administration. Speaking about her optional subject, Ankita highlights the need to know if you are, first, interested in the subject and, if yes, then follow it up with a thorough examination of the syllabus. Ankita chose Public Administration because she was interested in the subject from the beginning. The syllabus was comparatively less and most of the syllabus overlapped with the GS papers. Ankita attempted all the 20 questions in the mains optional paper.

# The Hindu & The Indian Express

Learn about the Course Materials

The curriculum is at the heart of each test. You must first comprehend the curriculum before beginning to read the books. It will assist you in determining what should be read and what may be skipped. Because all test questions are drawn from the curriculum, it is necessary to maintain a continual eye on the syllabus.

As a result, the first step for all undergraduates is to familiarise themselves with the UPSC syllabus and IAS test pattern. For the preliminary and main CSE examinations, UPSC has published a thorough curriculum. Students should also be informed of the exam’s eligibility requirements.

If you want to become an IAS officer, you must understand that reading newspapers is an important part of your CSE preparation. Keep yourself up to date on what’s happening around the globe. Current events and concerns are, in reality, live topics that may be learned about by reading newspapers.

Many of the toppers suggest being updated on current events. Also, check the Sarkari Result website on a frequent basis, since all UPSC test announcements are posted there.

You should go through all of the prior papers to get a better grasp of the test. This will give you a sense of the major segment as well as the questions that will come up again and again. It is advised that you analyse each question further since doing so will guide your learning strategies toward the ideas and subjects on which UPSC has created the questions.

You may also gain an indication of your preparedness by reviewing past papers.

NCERT Books Should Be Consulted

The NCERT is an autonomous organisation whose purpose is to provide Indian schoolchildren with a high-quality education.

For the IAS exam, there are a variety of study resources available, however, it is advised that you start with the NCERT books, which explain subjects in basic terms. Students should read NCERT books from classes 6 to 12 for relevant topics.

You must guarantee that these books are covered as quickly as possible because NCERT alone will not bring you forward. It’s preferable if you finish them in the first 3 months of your study period.

The use of notes will be critical in your attempt to pass the IAS test. It would be difficult to continue with your preparation without having adequate and efficient notes.

After checking reliable sources of information, try to write notes with correct analysis. Because you simply wouldn’t be able to re-read the entire content owing to time restrictions, these notes will be useful in preparing for your test.

This is an important element of your IAS test preparation over the last 3 months. Taking practise tests for the preliminary and major examinations will be useful. It will benefit you in 2 ways: first, you will have a better understanding of the kind of questions that will be given on the test, and second, you would be able to manage time more effectively.

These sample papers, according to the IAS toppers, constitute an important part of UPSC preparation. Regular practise will help you increase your speed, analyse your preparation, compare yourself to your opponents, and build your confidence.

The necessity of revising cannot be overstated, especially because the Prelims require recalling a large number of facts. This is when taking notes comes in handy. You may quickly revise the entire curriculum with well-written notes.

Work hard and stay the course. Because of the immensity of the work, you may be tempted to quit. Remember that the preliminary round is only half of the battle. At this point, you can’t afford to lose your excitement.

So get your head down, study hard, and force yourself to go the additional mile. Exams should not be viewed as a burden, but rather as an opportunity to develop and demonstrate intellect.

IAS Ankita Chaudhary’s story is a source of inspiration for the aspirants of the IAS exam. She was a regular girl who struggled to realize her dreams and had to give up on the pleasure of friends and family and even social media which has become an important source of entertainment and satisfaction for our generation.

Prepare better for your UPSC exam with the help of UPSC Pathshala. Check out the best in class courses and daily posts to keep track of the UPSC updates. 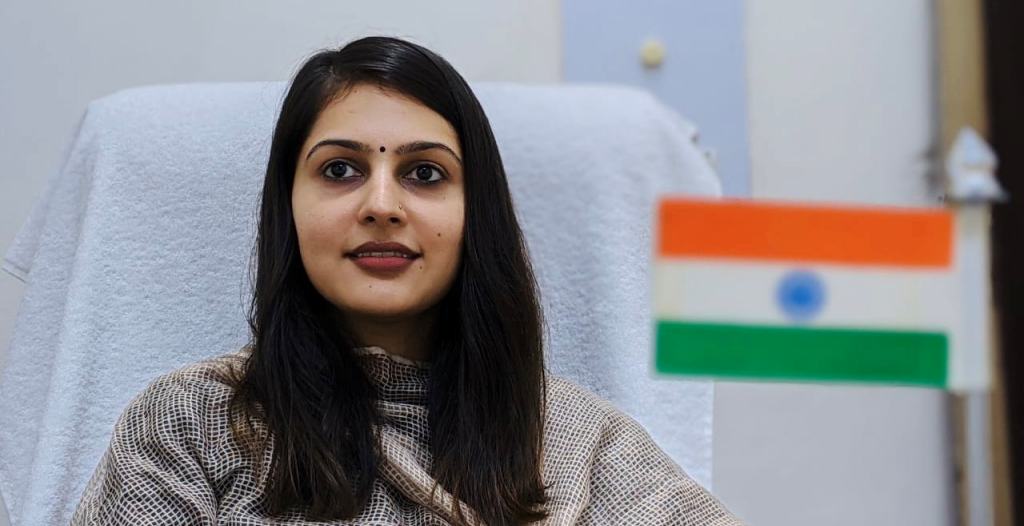 Article Name
IAS Ankita Chaudhary Wiki: Biography, Education, Rank & Facts to Know
Description
Who is IAS Ankita Chaudhary? Why is she a role model of a lot of IAS aspirants? Get to know about her career, UPSC journey, and much more. Click here to read now.
Publisher Name
UPSC Pathshala
Publisher Logo