The initials are the same for Indian Foreign Service and Indian Forest Service and recruitment into both these are done via the yearly examinations conducted by the union public service commission but both the roles are fundamentally different. Let’s take a look at their similarities and differences.

What is Indian Foreign Service?

The Ambassador, High Commissioner, Consul General, Permanent Representative of India to the United Nations and Foreign Secretary are some of the offices held by the members of this profile.

How is an Indian Foreign Service Officer Recruited?

The Civil Services Examination is used for recruitment for the IFS. The entire selection process lasts for about 12 months. To be selected as an IFS officer, you need a topper’s rank as the most important eligibility criteria. Indian Foreign Service recruitment in recent years has done 16 to 20 recruits per year.

The present strength of the office stands at approximately 800 officers manning around 183 Indian missions and posts abroad and the various posts in the Ministry at Home (Defense, Finance, Home, etc.)

Training of an IFS Officer

New entrants to the role undergo significant training that is considered to be one of the most challenging and longest trainings in the Government of India and spanning almost 3 years.

Training begins at the Lal Bahadur Shastri National Academy of Administration (LBSNAA) in Mussoorie, where members of many elite Indian civil services are trained. After completing a 15-week training at the LBSNAA, the probationers join the Foreign Service Institute in New Delhi for more intensive training in a host of subjects important to diplomacy, including international relations theory, military diplomacy, trade, India’s foreign policy, history, international law, diplomatic practice, hospitality, protocol and administration.

They also go on attachments with different government bodies and defence (Army, Navy, Air Force, CAPF) establishments and undertake tours both in India and abroad. The entire training programme lasts for a period of 36 months.

Upon the completion of the training programme at the Institute, the officer is assigned a compulsory foreign language (CFL). After a brief period of desk attachment in the Ministry of External Affairs, at the rank of Assistant Secretary, the officer is posted to an Indian diplomatic mission abroad where her/ his CFL is the native language.

There the officer undergoes language training and is expected to develop proficiency in the CFL and pass an examination before being allowed to continue in the role.

The role is entrusted to conduct diplomacy and manage foreign relations of India. It is the body of career diplomats serving in more than 162 Indian Diplomatic Missions and International Organisations around the world. Besides, they serve at the headquarters of the Ministry of External Affairs in Delhi and the Prime Minister’s Office.

They also head the Regional Passport Offices throughout the country and hold positions in the President’s Secretariat and several ministries on deputation. Foreign Secretary of India is the administrative head of the Indian Foreign Service.

As a career diplomat, the Foreign Service Officer is required to project India’s interests, both at home and abroad on a wide variety of issues. These include bilateral political and economic cooperation, trade and investment promotion, cultural interaction, press and media liaison as well as a whole host of multilateral issues.

The Functions of an Indian Diplomat can be Summarized as:

What is Indian Forest Service?

On acceptance to the Indian Forest Service , new entrants undergo a probationary period (and are referred to as Officer Trainees). Training begins at the Lal Bahadur Shastri National Academy of Administration in Mussoorie, where members of many elite civil services are trained for 15 weeks.

On completion of which they go to the Indira Gandhi National Forest Academy at Dehradun, for more intensive training in a host of subjects important to Forestry, Wildlife Management, Biodiversity, Environment Protection, Climate Change, Forest Policies and Laws, Remote Sensing and GIS, Forest Dwellers and Scheduled Tribes.

After completion of their training, the officers are awarded a master’s degree in Science (Forestry) of Forest Research Institute. The officers are taught more than 56 subjects of life sciences in these two years.

Other Parts of the Training

Also Read: Understanding the Different Dimensions and Branches of Ethics: Ethics for UPSC

When an aspirant of the union public service commission successfully clears the Indian forest service exam and goes through the training period then he/ she becomes an officer.

The main mandate of the profile is the implementation of the National Forest Policy in order to ensure the ecological stability of the country through the protection and participatory sustainable management of natural resources.

Indian Forest Service officer is wholly independent of the district administration and exercises administrative, judicial and financial powers in his own domain. Positions in the state forest department, such as Divisional Forest Officer (DFO), Conservator of Forests (CF) and Principal Chief Conservator of Forests (PCCF) etc are held only by IFS officers. The highest-ranking IFS official in each state is the Head of Forest Forces.

The Ministry of Environment, Forest and Climate Change under the Government of India is the Cadre Controlling Authority of the Indian Forest Service.

The officers have the eligibility for State and Central deputations as their counterpart IAS and IPS officers. Deputation of Forest Service officers to the Central Government includes appointments in Central Ministries at the position of Deputy Secretary, Director, Joint Secretary and Additional Secretary etc.

Many union public service commission exam aspirants aim for these profiles and work very hard for achieving their goal. So which one is your targeting? Share your thoughts with us in the comment section below.

Also Read: IFS vs IAS: Which One is Better & Why? How to Become an IAS/ IFS Officer? 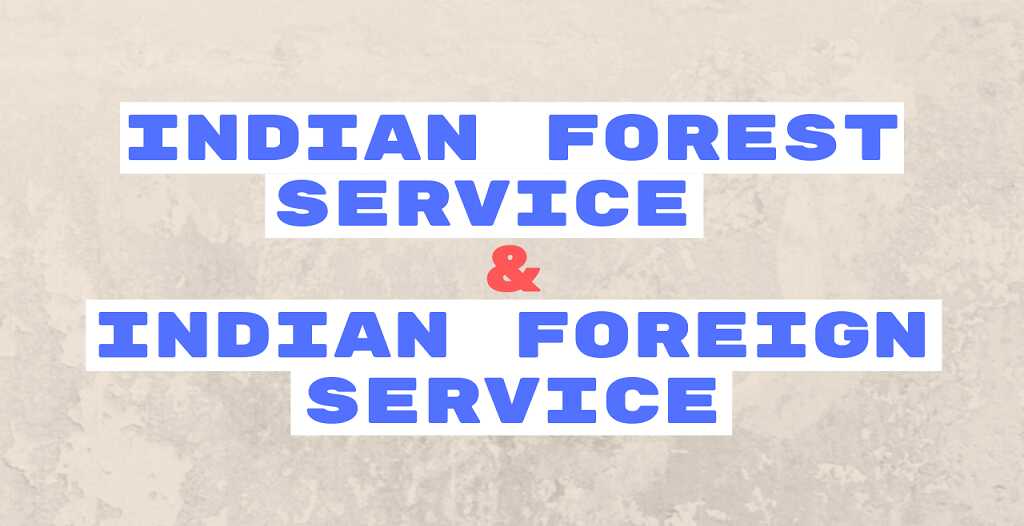 The Constitution of India: A Guide Through the Parts, Schedules and Articles