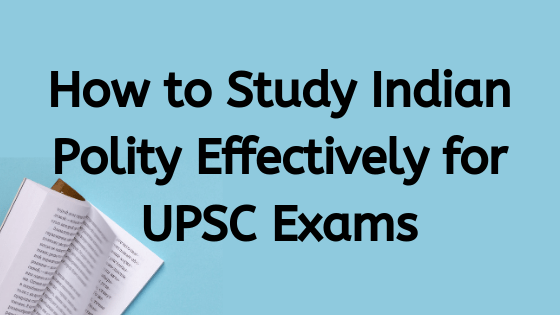 How to Study Indian Polity Effectively for UPSC Exams?

How to Study Indian Polity Effectively for UPSC Exams?

How to study Indian Polity is undoubtedly a common query asked by a majority of UPSC aspirants.

To settle all your doubts regarding how you should start your preparation process, our experts have listed out helpful tips you can inculcate in your study routine to achieve your desired target.

The Books To Refer

The questions asked under this topic are definitely tricky, but highly scoring. We can categorize the questions into the easy, moderate and difficult range.

Given the following statements:

Which among the above statements given is/are true?

With reference to the Indian parliament, which among the following parliamentary committees studies and reports whether the power to make rules, regulations, sub-rules, etc, conferred by the Indian constitution or delegated by the parliament are properly being utilized within the scope of the above said delegation?

Difficult
Highly tricky in nature. These questions are created to confuse you. They require thorough understanding  of the question, and application of concepts that fit.

Which among the following best symbolizes the appropriate relationship between liberty and the law of the land?

How To Read Indian Polity By M Laxmikant

The  book is categorised into multiple divisions.

Besides reading the above mentioned book well at least once, you must adopt the practise of note-making and prepare notes for Indian Polity. Ensure daily reading of newspapers, and solving the prelims papers from the previous years.

We hope this clears all your doubts on how to study Indian Polity. This subject is a high-scoring subject if you have clarity and clear understanding of the basics underlying the concepts.

How to Concentrate on Studies for UPSC Exams? Here’re 12 Powerful Tips to Boost Your Preparation

How to Balance Optional and General Studies to Clear UPSC? Here’s the Way to Ace the Balancing Game

IAS Anjali Birla Wiki: Learn all about Her Marksheet, Strategy and Obstacles

Should I Join an IAS Coaching after Graduation or First Read All the NCERT Books?