Are you preparing for UPSC and chose history as your optional subject? Then the first thing you should know is the history optional syllabus for UPSC. Only after you get accustomed to the syllabus of history for UPSC, can you start looking for various study materials and history optional question papers that will help you prepare even better.

Here is this article, you are going to get a clear idea about the UPSC history syllabus along with some important webpage links that will definitely help you crack the UPSC IAS exam. So, let’s not waste any more time.

Optional Subject consists of 2 papers. Each paper is of 250 marks, making a total of 500 marks.

Geographical factors; hunting and gathering (palaeolithic and mesolithic); Beginning of agriculture (neolithic and

# Expansions of Aryans in India.

Iranian and Macedonian invasions and their impact.

The disintegration of the empire; Sungas and Kanvas.

#11. The Regional States during the Gupta Era

Languages and texts, major stages in the evolution of art and architecture, major philosophical thinkers and schools, ideas in Science and Mathematics.

# Polity: Major political developments in Northern India and the Peninsula, origin and the rise of Rajputs – The Cholas: administration, village economy and society

# Society: the status of the Brahman and the new social order

# Philosophy: Skankaracharya and Vedanta, Ramanuja and Vishishtadvaita, Madhva and Brahma-Mimansa

# Religion: Forms and features of religion, Tamil devotional cult, growth of Bhakti, Islam and its arrival in India, Sufism

# Foundation of Delhi Sultanate and early Turkish Sultans – Consolidation: The rule of Iltutmish and Balban

#17. Society, Culture and Economy in the Thirteenth and Fourteenth Centuries

#18. The Fifteenth and Early Sixteenth Century – Political Developments and Economy

#19. The Fifteenth and early Sixteenth Century – Society and Culture

# Society, culture, literature and the arts in the Vijayanagara Empire.

# Conquests and consolidation of the Empire

# Establishment of Jagir and Mansab systems

# Evolution of religious and social outlook, the theory of Sulh-i-kul and religious policy

# Court patronage of art and technology

#21. Mughal Empire in the Seventeenth Century

# The Empire and the Zamindars

# Nature of the Mughal State

# Late Seventeenth-century crisis and the revolts

# Shivaji and the early Maratha Kingdom.

#22.  Economy and Society in the Sixteenth and Seventeenth Centuries

# Evolution of the Sikh community and the Khalsa Panth

#23.  Culture in the Mughal Empire

# Persian histories and other literature

# Hindi and other religious literature

# Factors for the decline of the Mughal Empire.

# Maratha ascendancy under the Peshwas.

# The Maratha fiscal and financial system.

# The emergence of Afghan Power, Battle of Panipat:1761.

# State of politics, culture and economy on the eve of the British conquest.

Also Read: Indian History Notes for UPSC: A Guide to Self Study for History Easily

#3. Early Structure of the British Raj

The early administrative structure; From diarchy to direct control; The Regulating Act (1773); The Pitt’s India Act (1784); The Charter Act (1833); The voice of free trade and the changing character of British colonial rule; The English utilitarian and India.

# Dislocation of traditional trade and commerce; Deindustrialisation; Decline of traditional crafts; Drain of wealth; Economic transformation of India; Railroad and communication network including telegraph and postal services; Famine and poverty in the rural interior; European business enterprise and its limitations.

The state of indigenous education, its dislocation; Orientalist-Anglicist controversy, The introduction of western education in India; The rise of press, literature and public opinion; The rise of modern vernacular literature; Progress of science; Christian missionary activities in India.

#6. Social and Religious Reform Movements in Bengal and Other Areas

#8. Factors leading to the birth of Indian Nationalism

Politics of Association; The Foundation of the Indian National Congress; The Safety-valve thesis relating to the birth of the Congress; Programme and objectives of Early Congress; the social composition of early Congress leadership; the Moderates and Extremists; The Partition of Bengal (1905); The Swadeshi Movement in Bengal; the economic and political aspects of Swadeshi Movement; The beginning of revolutionary extremism in India.

The Nehru Report; the Round Table Conferences; Nationalism and the Peasant Movements; Nationalism and Working-class movements; Women and Indian youth and students in Indian politics (1885-1947); the election of 1937 and the formation of ministries; Cripps Mission; the Quit India Movement; the Wavell Plan; The Cabinet Mission.

#10. Constitutional Developments in Colonial India between 1858 and 1935

#11.  Other Strands in the National Movement

The Revolutionaries: Bengal, the Punjab, Maharashtra, U.P, the Madras Presidency, Outside India.The Left; The Left within the Congress: Jawaharlal Nehru, Subhas Chandra Bose, the Congress Socialist Party; the Communist Party of India, other left parties.

The Muslim League; the Hindu Mahasabha; Communalism and the politics of partition; Transfer of power; Independence.

#13. Consolidation as a Nation

Nehru’s Foreign Policy; India and her neighbours (1947-1964); The linguistic reorganization of States (1935-1947); Regionalism and regional inequality; Integration of Princely States; Princes in electoral politics; the Question of National Language.

Land reforms; the politics of planning and rural reconstruction; Ecology and environmental policy in post-colonial India; Progress of science.

# Spread of Enlightenment in the colonies

# Rise of socialist ideas (up to Marx); spread of Marxian Socialism.

# American Revolution and the Constitution.

# American Civil War with reference to Abraham Lincoln and the abolition of slavery.

# Rise of Nationalism in the 19th century

# Nationalism: state-building in Germany and Italy

# Disintegration of Empires in the face of the emergence of nationalities across the world.

# World War I: Causes and consequences

# Emergence of Third World and non-alignment

# Consolidation and Expansion of European Community

#27. The Disintegration of the Soviet Union and the Rise of the Unipolar World

# Factors leading to the collapse of Soviet communism and the Soviet Union, 1985-1991

# End of the cold war and US ascendancy in the World as the lone superpower.

# From the Rigvedic through the later Vedic periods, Vedic society and literature change.

# Vedic culture The development of the Varna system and monarchy, religion-Upanishad thought-Political and social organisation

# From the Mahajanapadas to the Nandas, the establishment of the state and urbanism took place.

# Chandragupta and Megasthenes were the founders of the Mauryan Empire.

# Asoka’s inscriptions, dhamma, culture, governance, and art were all important to him.

# The Satavahanas and the establishment of the Peninsula’s polity.

# Texts from the Sangam and society.

# Contacts with the outside world: Indo-Greeks, Sakas, Parthians, Kushans, Kanishka’s.

# The Guptas and their offspring.

# Literature, sciences, the arts, the business, and society – Changes in the empire’s governmental system.

Hopefully, this article will give you a brief idea about the history optional syllabus for UPSC. For important notes, history optional question papers, reference books etc, you can keep an eye here. You can also share your thoughts with us about choosing history as your optional paper and how you are preparing for it. To comment, write your thoughts in the box below. Best of luck! 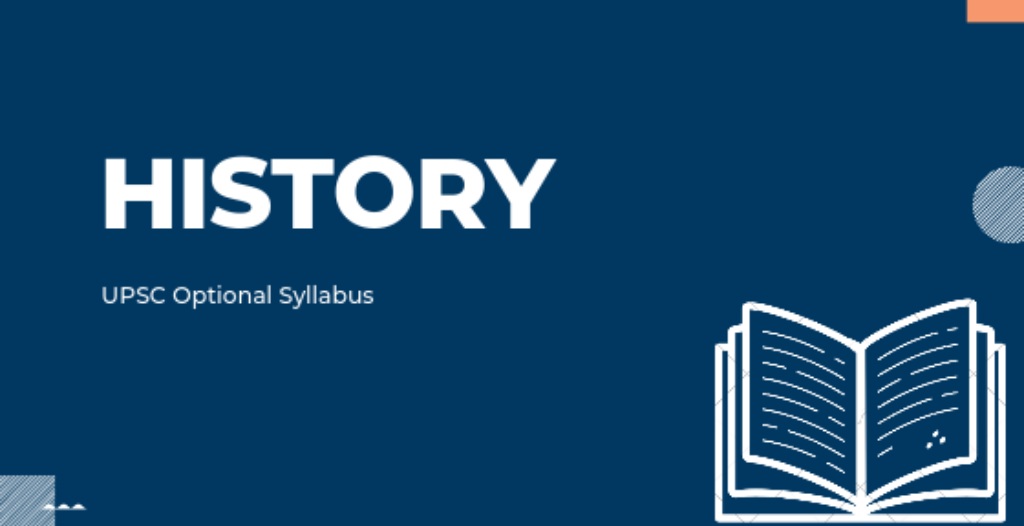