The term ‘pressure group’ originated in the USA. Pressure groups mean a group of people who are organized to actively promote and defend their common interests. They are a vital link between the government and the governed and they keep governments more responsive to the wishes of the community, especially in between elections.

What are the Pressure Groups?

A Pressure group is a collective form of people who come together for the benefit of the common and aims to protect and promote their common interest. With their methods, they try to influence the government’s public policies.

Role of the Pressure Group

The role of the pressure group is indirect, ordinarily invisible, and intermittent, yet, a very important part of the administrative system. The emergence of trusts and monopolies and the struggle over tariffs led to the formation of these. It is a living public behind the parties. These groups’ roles are as vital as that of a political party existing in any country.

The constitution of India gives everyone rights to protect and promote their interest hence these pressure groups act and try to alter the government’s decision whenever they feel like their interests are violated by any government policy.

In India, political parties and pressure groups together play a big role in the power struggle. In India, the pressure group arose even during the colonial period. All India trade union congress was the first countrywide pressure group of the working class.

India was a developing country having a scarcity of resources and acute poverty, resulting in the significant role of the pressure group. This pressure group aimed to secure economic and political concessions for them. Providing crucial components of the structural equilibrium i.e. maintenance function.

Features of the Pressure Group

Features of the pressure groups are as follows:

#1. Based on Certain Interest

Each pressure group works per a particular interest and thus tries to hold some political power to realize their goals.

#2. Use of Modern and Traditional Means

Another important feature of a pressure group is the use of both traditional and modern ways. Like traditional ways, they keep financing political parties, sponsor their representatives and persuade bureaucrats. They also follow modern means of exerting pressure.

#3. Resulting out of Increasing Pressure on Resources

India is a developing country and thus its resources are limited. Different groups claim their share of the resource and to ensure proper allocation public policies are formed. However, this does not satisfy everyone’s claims and as a result, they start mass movements or protests and as a result, pressure groups rise.

#4. Alternative to Inadequacies of Political Parties

Pressure groups are a consequence of the inadequacies of political parties.

May operate at local, regional, national, international levels, depending upon the cause and notice.

They are usually non-profit and volunteer organization

They seek to influence political or corporate decision-makers to achieve a declared objective.

These are collections of individuals who hold a similar set of values and beliefs based on ethnicity, religion, political philosophy, or a common goal.

Pressure groups often represent viewpoints of people who are dissatisfied with the current conditions in society.

These are a natural outgrowth of the communities of interest that exist in all societies.

Pressure groups are widely recognized as an important part of the democratic process.

These may be better able to focus on specialized issues, whereas political parties tend to address a wide range of issues.

Role of Pressure Groups in India

Leadership, organizational abilities, mass media, economic power base, and mobilization techniques determine the capacity of these. Besides this, they use lobbying methods, strikes, bandh, demonstrations, funding political parties, party platforms, etc. Even though the role of the pressure group is indirect, it facilitates many vital activities in administration.

To influence the government policy or change their decision to protect their interest, pressure groups follow different methods. This may include financing political parties, or the use of lobbyists and intermediaries to control bureaucrats.

# Electioneering: Electioneering is a process where interest groups choose those people for the public offices who are favourable towards their interests.

# Lobbying: This method involves forcing or persuading public offices to adapt and enforce policies that promote their interests.

# Propagandizing: This is another popular method to influence the public’s opinion in their favour and thus influencing the government indirectly.

Every pressure group uses similar methods but the effect of these methods is not uniform. For some groups, these methods are more effective than others. This depends on several factors; let’s take a look at them:

Leadership is the most essential component of a pressure group. The leader is presented as a public image and represents the interest. They are responsible to communicate with the political parties, public officers, and the public to realize their goals.

India is a vast country and therefore a pressure group needs to be of proper size and good organizational network. The organizations should work throughout the country for two main reasons: first, to associate with different facets of interest groups, and secondly, should improve the communication channel.

Nowadays, the media is capable of creating a powerful public image of someone and influencing public opinion through continuous debate and propaganda.

Following are the various roles that might be helpful for your UPSC preparations.

Pressure groups play a crucial role in the legislative process. They have their active agencies that are engaged in lobbying with the legislative members to make policies or amendments in them in favour of their interest. They start with the election and continue to play an active role in law-making.

Try to fill high executive posts with men of their own choice i.e. selection of cabinet, distribution of portfolios, and P.M selection due to the prevalence of coalition government. In addition, henceforth influences policy implementation processes.

Bureaucrats are politically neutral and hence pressure groups try to oblige them by putting good remarks that protect their interests. Bureaucrats have long tenure and so they are in contact with them to oblige.

Appointment of judges in political affairs and here pressure groups play an important role in that they occupy high judicial offices.

Pressure groups represent the interests of the minority or give voice to the section that is suffering. They are important for liberal democracy. Moreover, they play an active role in educating the public. On their way to achieve their goal, they educate people about different policies or interests.

# Institutional Interest Groups: These are professionally organized people and are a part of the government machinery. They try to exert influence but they do not have much autonomy. This includes political parties, legislatures, armies, bureaucracies, churches, etc. They try to raise voice for their interest but in accordance with the rules and regulations.

#Associational Interest groups: These groups are organized for interest articulation. This may include trade unions, business or institutional groups, etc.

# Anomic Interest groups: These groups have an analogy with self-representation and thus often break through the political system through riots, demonstrations, signature campaigns, street corner meetings, etc. They adopt any method for the realization of their goal whether constitutional or unconstitutional.

# Non-Associational Interest groups: These are kinship or lineage groups based on ethnic, regional, status or class groups. They aim to articulate their interest on these bases and have a rather informal structure.

It is one of the most important, influential, and organized pressure groups in India. They are independent of any political party and have enough resources to pursue their interests. Major constituents are the Bengal Chamber of Commerce Calcutta and the Central Commercial Organisation of Delhi.

# Federation of Indian Chambers of Commerce and Industry (FICCI)

Trade unions cater to the demand of workers and labourers of the industries. Alternatively, they are also known as labour groups. In India, different trade unions represent different political parties.

These groups represent the farmer community of India and work for their well-being.

There are various organizations present to represent the causes and grievances of students in India.

Caste has been one of the salient features of Indian Society. However, it has always been one of the ideologies discouraging the aspiration of people and the constitution of India. The caste factor is always prevalent in elections in India.

Tribal groups in India are prominent in Central India and North East India and are also active in the Central Indian Tribal belt and northeast India.

Such associations raise the concern of working professionals in India ranging from lawyers and doctors, journalists and teachers.

Ideology-based groups have been recently formed.

Anomic pressure groups refer to those spontaneous groups which are formed with a collective response through riots, demonstrations, assassinations, etc.

The Indian government and bureaucratic elite overwhelmed by the problem of economic development and scarcity of resources available to them, inevitably acquires a technocratic and anti-political frame of mind, particularistic demands of whatever kinds are denied legitimacy.

As a consequence, pressure groups are alienated from the political system.

Political parties and pressure groups are both very important in the decision-making of the various policies and exist along with political parties in every nation but there is a vast difference between the two.

This is important for UPSC preparations.

Media as a Pressure Group

Mass media plays a vital role in revealing the various happenings of politics and the life of common people all around. In countries such as India the mass media –the radio, TV, the cinema, and the press are very powerful means of social change and act as a pressure group for the interest of the common people and reveal all deeds of the government.

Mass media in its full swing of working can openly criticize the government and have the right to place their view on a certain situation. Further mass media help to generate a common platform that tries to focus on core issues of the society and its needs.

So the media’s role is just as important in influencing activities of the political parties, like that of other groups working to strive for certain specific goals. In fact, in this contemporary world media acts as an agent of change focusing on the social development of society and hence the media role of pressurizing the government given its nature of pressure group which is of vital importance.

Expected Questions from Pressure Groups for the Upcoming UPSC Mains

#1. How do Pressure groups influence politics in India? Discuss their roles.

Despite major criticism, the existence of a group is now an indispensable and helpful element of a democratic setup. These groups promote national and particular interests and constitute a link of communication between citizens and the government. They provide the necessary information and keep the nation politically alive.

Today democratic politics has to be politics through consultation, negotiation, and some amount of bargaining. These cannot happen without the pressure groups. The society has become highly complex and an individual cannot pursue their interest on their own, they need a pressure group for this. These are so vital that they are not confined to the needs of developed or developing nations or any form of government. 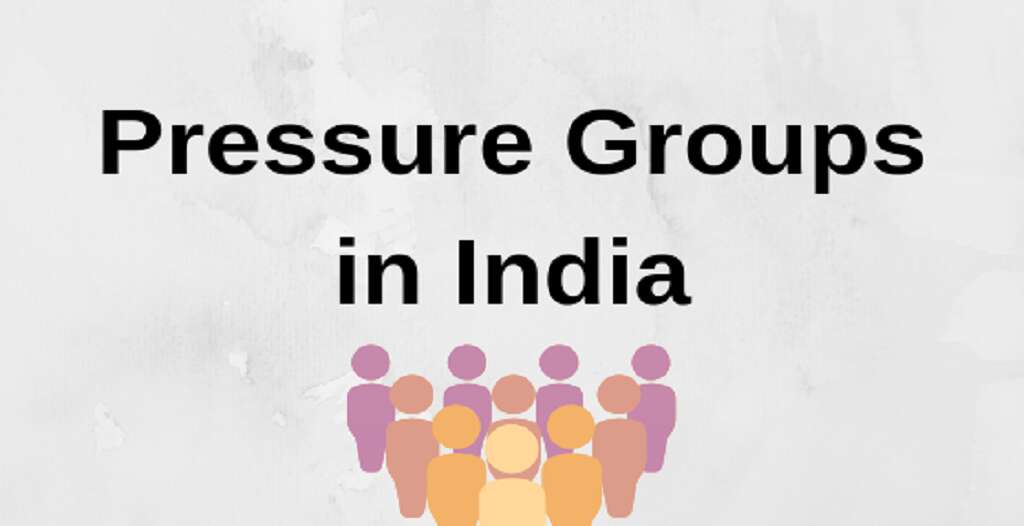 Article Name
What are Pressure Groups in India? Everything You Need to Know for Your UPSC Preparations
Description
Learn everything about the pressure groups that you need to know for boosting your UPSC preparations. Read on to get detailed information.
Publisher Name
UPSC Pathshala
Publisher Logo

How to Start IAS Preparation at Home without Any Coaching? Learning Strategy for UPSC