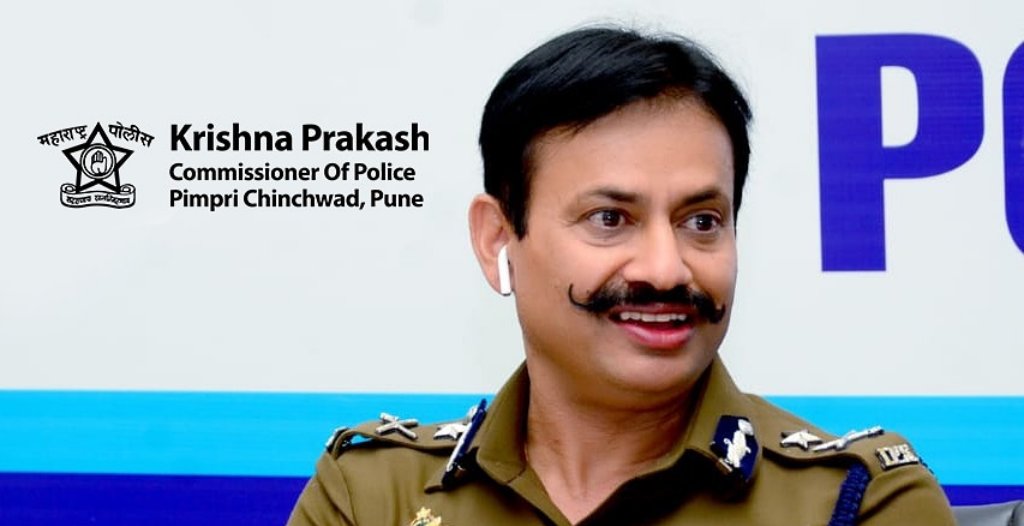 Who is Krishna Prakash IPS?

Before joining the Chinchwad Commissionerate, he was serving as the Special IGP, dealing with VIP security, where his job was to protect all the protectees of Maharashtra and the protectees visiting Maharashtra from other states. He also had this dual responsibility where he was in charge of PAWC (Prevention and Atrocities against Women and Children) the state.

Apart from his career in civil services, he is famous for his achievement of the twin gold feathers in his cap that are marked for the victory in the two Internationally recognised triathlon titles, first being the “Iron Man” title (2017)  and the second being “Ultraman” (2018) in the Ultraman World Championship.

What was his Background?

Krishna Prakash was brought up in a joint family in a small village called Korambae in Hazaribagh, Jharkhand. Initially, he studied in a school situated within the village itself, which from the infrastructure to the staff, was very unorganised. He was then shifted to a Catholic school in Hazaribagh, where because of his rural background, he faced a major downfall in studies. However, he was successful in progressing in every successive class at the same school. Later, he majored in History from St. Columba’s College, Hazaribagh.

What was his Journey towards UPSC?

In many of his motivational speeches, he has talked about a significant movement in his life which specifically pushed him towards a career in civil services. He mentioned that during his college years, he was tortured and threatened by the local police for protesting against encroachment done by one of his neighbours.

He tried to act against the building of a wall around a local well by his neighbour, who was a chief engineer, and the local police supported this. In their support, the police tried to file false cases against Prakash, and he was tortured for the whole day. This incident induced a major rage inside his young mind against the corrupt cops, and thus, this motivated him enough to become an honest IPS officer in future.

After his college years, he joined Nehru Yuva Kendra (NYK) where he remained dedicated to social work, aspiring the youth of his local area towards equality and rights. He started giving a series of lectures on secularism there and also contributed to the regular magazine of the association.

Krishna Prakash decided to appear for civil services in 1995, however, in two of his successive appearances for the examination, he was not able to score well in the interview. During his third interview, he was asked by the panel, how much marks should be given to him to rank as an IPS officer, in his reply Prakash mentioned that he did not want a single mark more than he deserves and did not want a single mark less than he deserves. He then gained 198 marks out of the total 275 marks in the interview and thus became an IPS officer in his third attempt.

Where is his Current Posting?

After his transfer to Mumbai in 2012, Prakash served as the Additional Commissioner in the South Region, and later as the Inspector General of Police (IGP) at the headquarters of Mumbai Police.

What are the Reasons behind his Popularity?

IPS Krishna Prakash not only introduces himself as a civil servant but also stands as a motivational speaker and as well as the titleholder of two internationally acknowledged triathlons. His titles, along with his courageous job, have added a never-ending charm to his personality in Maharashtra. He now stands as one of the most popular cops in India.

The Title of Ironman

In 2017, he won his first title of ”Ironman” in the Ironman Triathlon, which consists of three phases of races—first being 3.68 km of swimming followed by a cycle race of 180 km and then the last stage of a 42 km marathon. However, after winning the title, he got hospitalised because of the severe injuries done to the joints. He was then subjected to a 6-month rest, but during the same period, he got himself registered for the next triathlon, the “Ultraman World Championship” of 2018. For the title of “Ultraman”, forty-eight-year-old Prakash underwent a three-day race in which he had to complete 10 km (6.2 miles) open ocean swimming, followed by 421 km (261.4 miles) cross-country bike ride and lastly 84 km (52.4 miles) ultra-marathon run. This title remains his significant achievement because of his immediate participation in the triathlon after his severe fracture in the previous year.

Popularly known as ‘KP’, IPS Krishna Prakash is among the fittest cops in India whose dedication and interest in achieving new ventures do not come to an end. Aside from being a fearless cop dealing with the most atrocities in the city of Mumbai, he also remains confident towards his personality of being a fantastic second-generation triathlon athlete of India.

Stay tuned for more such articles on our site.

IAS Ira Singhal Posting and Mark Sheet: Her Journey to Rank 1 in UPSC 2014