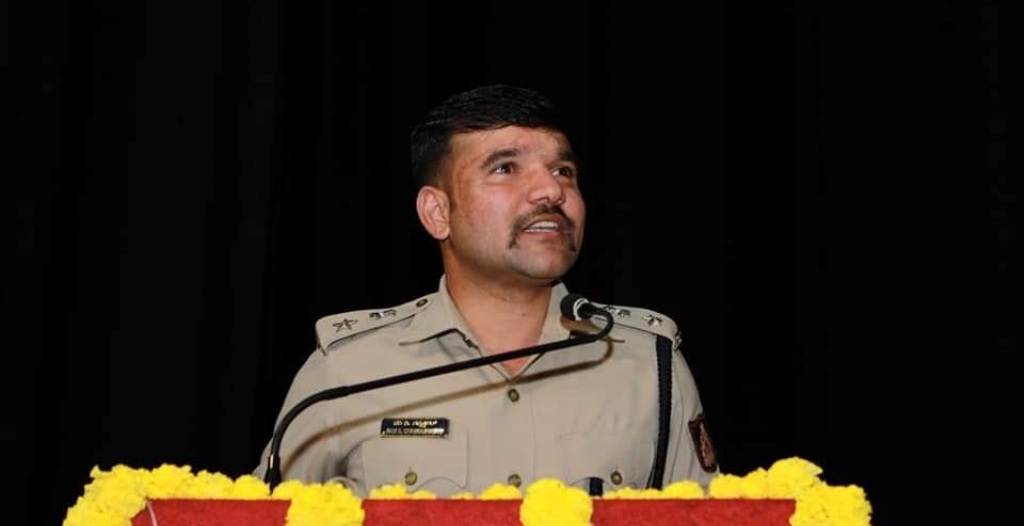 Battling with poverty, yet shining like the brightest star, the story of Ravi D Channannavar IPS inspires every IPS student and thus needs to be told. After reading this article, you would know the whole Ravi D Channannavar wiki and his ultimate journey towards becoming an IPS.

Born on 23rd July 1985 in a small village of Nilgunda, Ravi was raised in a family of agricultural labourers. His father Dhyamappa Channannavar and Mother Ratnamma raised him as a gem of their eyes. Ravi did his early schooling from a local school of Dharwad that was a Nilgunda government school. Coming from a poor background, Ravi tasted the reality of life way before his age and took the responsibility of his education on his shoulders.

Along with school, Ravi worked in hotels to meet his schooling fees and expenses. Besides, he often bunked his classes and worked on the fields to earn more money. He would have left the school if his teachers, who saw the immense potential in him, wouldn’t have encouraged him to continue the course. He returned this life-saving favour and trust of teachers in him with abundance by scoring the highest marks and 87% in class 10th.

For his Bachelors in Arts, Ravi went to Karnataka Arts College and got his bachelor’s degree. There he earned a lot of appreciation for his personality and hard work and his feeling of exemplary resentment at social imbalance that was frequently directed at his theatre and speech.

Writing his own Destiny

Struggle –  A Constant Companion
Ravi D Channannavar tells us that during his pre-university days in Hulkoti, he took a job as a sweeper at the theatres and later even joined some hotels as a waiter. The struggle was a constant companion to Ravi, but he never gave up.

Some people resisted Ravi from taking up Civil Services as otherwise, he was adamant about continuing his post-graduation or master’s degree from Jawaharlal Nehru University, New Delhi. Ravi finds his days in Hulkoti lucky as it was here, where he met a generous businessman Mr Subhash Sasvihalli who extended his hand towards him financially and helped him in getting his UPSC coaching classes in Hyderabad.

He then began his studies for the exam, along with his hard work for managing his expenses. Ravi always continued his part-time work and jobs besides his studies. Ravi D Channannavar optional subject is something Ravi has not closed on yet, but he reckons to always choose the optional subject on which you are most knowledgeable.

During this time, he worked at a bar from 6 pm to midnight continuously. He did all kinds of odd jobs that came his way so that he could contribute well to his studies.

Also Read : Who is Roman Saini? Wiki, Net Worth & Facts about Ex-IAS Officer

In 2007 he took IAS training at Hyderabad and in the very 1st attempt of CSE held by UPSC in 2008, Ravi D Channannavar UPSC rank was 703 all over India. He never accepted the corrupt political system and always took actions against them in colleges or schools, and today he stood by his words and climbed up towards his dreams and goals.

There were also days when Ravi had nothing to eat for two days straight, and he had to survive without having anything. Ravi D Channannavar’s marks and preparation strategy were proof of his hard work and extreme dedication which justified all of it in the end. In march 2012 Ravi met his other half and got married to Dr Triveni.

Known to roar like a tiger, Ravi has become a perfect and responsible civil servant at Karnataka today serving as an IPS superintendent of police, Bangalore. Ravi initiated many initiatives under his position and is working hard to bring a change in the system and society.

The list mentioned above are just a few steps Ravi took towards bringing a change and performing his duty; there’s a long list where he continues to set examples with each day of practice.

“He requests the public to inform about any illegal activities or perpetrators around so that actions can be taken against them and the name of the informer will be kept confidential”, a statement made by Ravi D Channannavar in a Jan Lok Sabha meeting.

He is known for bringing in novel solutions, like urging the young volunteers to come up to deal with the traffic problems. By making the traffic warrants, they can handle the traffic jams with better productivity. Working only for two hours a day, and two days a week, problems can be solved together says, Ravi. He has promised to meet every two months after completing the work deployed to listen and resolve issues arising.

Many such unique ways of working and thinking make Ravi stand out and outperform. He does his service honestly and with effective executions since the time he started.

Studying for UPSC exams along with working and earning for the family, Ravi D Channannavar marks is just the right example for all the aspirants who want to achieve their UPSC goals in life. Ravi says that self-respect and perseverance are the two things one should always have. Also, he gives a lot of credit to his disciplined lifestyle of following his schedule without any leniency.

Going through Ravi’s journey, we’ve witnessed how sheer dedication and devotedness towards your goal can achieve you anything in life, no matter how many difficulties you go through.

Stay tuned with more journeys like these through our regular brief biographies on UPSC champions on our website!

Also Read : IAS Topper Gaurav Agrawal: India Gets a Youth Icon – An Inspiration For All

Article Name
IPS Ravi D Channannavar Wiki: His Struggles and How He Conquered the Feat of UPSC!
Description
Witness the amazing journey of Ravi D Channannavar IPS from a sweeper in theatres to IPS Superintendent of Police, Bangalore. Learn more about his strategy.
Publisher Name
UPSC Pathshala
Publisher Logo